The risk of sustaining an injury in rugby league that requires medical treatment is about 40 injuries per 1,000 playing hours which is quite high compared to other Australian-participated sports.

There is a higher incidence of injury during tackling. However, the most common rugby league injuries that are seen by our Physio Inq physiotherapists are ankle sprains, hamstring tears, and knee pain. 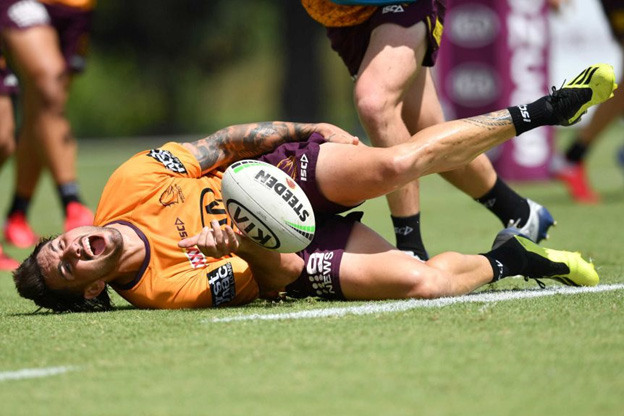 Identifying common injuries in rugby league and their prevention strategies will significantly reduce the incidence, severity, and cost of rugby league injuries to players. So, let’s get started.

According to the Australian Institute of Health and Welfare, almost 60,000 Aussies were admitted to hospital for sport-related injuries between the years 2016 and 2017. What’s more, is that 32% of these injuries were a result of playing one of the various codes of football including rugby league. Not to mention, AFL, rugby, and football accounted for 8% of all reported injuries overall.

It’s safe to say that, 1) Australians love to play sport and many people do and 2) rugby can be quite high risk (for obvious reasons).

Now, let’s get down to specifics. In a study of the 2002-2003 season, 678 out of every 100,000 rugby league players we admitted to hospital due to an injury. This rate was the highest among players ages 25 to 34 years old and the rates were five times higher among males versus females.

The numbers are lower among younger players. Those in the 6- to 11-year-old range had an injury rate of 4.1 injuries per 1,000 playing hours. However, injury rates seem to increase as playing increases. For example, there are more injuries in professional and competitive leagues. Plus, injuries happen more often during matches than in training.

What Causes Most Injuries in Rugby League?

Significantly more injuries occur in the later stages of a rugby league season and, furthermore, most injuries are sustained during the second half of any given match.

Your risk of sustaining an injury while playing rugby increases under the following conditions:

In addition to avoiding these risk factors, there are other safety measures you can take as a rugby player to prevent injuries including:

If an injury does occur during a rugby league match or during training, be sure to stop playing immediately or you could be at risk of doing more damage. Seek medical attention from qualified personnel like a physiotherapist and be sure your injury is fully rehabilitated before you attempt to return to play.

Musculoskeletal bruising and strains account for 30% of all rugby league injuries while joint and ligament sprains account for 20%. Fractures and concussions are less prevalent but still common accounting for 8% and 7% respectively.

Below, we’re going through some of the most common injuries that occur among rugby league players and what you can do to prevent them.

Any movement that causes the ankle ligaments to stretch beyond their normal capacity can cause an ankle sprain. In particular, the ankle gets sprained when you make a fast, shifting movement with your foot planted on the ground. This occurs frequently during a fast-paced rugby league game when changing direction or avoiding a tackle.

Additionally, poorly maintained fields can also contribute to an increased risk of ankle sprains. Stepping into a pothole or running on any uneven ground does no favours for your ankle’s stability.

During rugby league training or cross-training sessions, you should work on maintaining good balance, strength and flexibility to assist in preventing ankle sprains. If you are at high risk of this injury or have had ankle sprains in the past, it can help to wear an ankle brace or tape the ankle when you are exercising.
Plus, ensuring you’re practising or playing on a well-kept field is another way to protect yourself from sprained ankles.

A hamstring strain, also commonly known as a hamstring pull or tear, are usually caused by a sudden burst of movement and are common in sports like rugby league, which involve sprinting and quick changes of direction.

The best way to prevent hamstring injury is to complete thorough warm-ups and cool downs. This will help to prepare the body for exercise and then speed up recovery afterwards. Dynamic stretching is recommended as a warm-up and static stretches are recommended to cool down. These exercises will improve flexibility and range of motion, creating more forgiving muscles and tendons that are less prone to injury.

Pain below the knee cap could be coming from the patella tendon. All the running and jumping in rugby league can cause jumper’s knee, also known as patella tendinopathy. This is a degenerative condition causing micro tears in the tendon from overuse.

To prevent jumper’s knee, regularly stretch your quads and hamstrings. Inflexible quadriceps and hamstrings can put extra stress on the patellar tendon. Basic, disciplined stretches of both these muscle groups can help prevent tendinitis and heal it. Try dynamic stretches like leg extensions - however, lower the weight slowly after lifting it at normal speed.

Lower your risk of common rugby league injuries to the ankles, knee, and hamstrings by ensuring that you are in good condition before playing: work on balance, flexibility and agility during training, complete adequate dynamic warm-ups, and stretch following games. Do this to ensure you can be playing for the whole season and not two weeks of it.

Finally, one of the best things you can do for your rugby game is to work one-on-one with a sports physiotherapist. By following a personalised program, you can ensure the lowest possible risk of injury anytime you play rugby.

Book an appointment today and protect your body from an already strenuous game. Visit one of our convenient Australia locations or let our mobile physio services come to you.