What exactly is being “jet-lagged” and can we overcome it?

What exactly is being “jet-lagged” and can we overcome it?

Aussies experience a lot of jet lag. In order to visit most other countries, you’re looking at some pretty intense jet lag after as much as two whole days of air travel. It’s just the reality of living down under and so far away.

But what does it actually mean to be jet-lagged? Are there ways to overcome it? Here, we’re sharing everything we know about jet lag and how we can make it less… horrible.

Why do we experience jet lag?

Our sleep cycles are heavily reliant on the movement of the sun. So, how much light we receive directly affects our sleep patterns. When it’s bright, our body tells us it’s time to wake up. At nightfall, our body sends us signals that it’s time for bed.

Now that humans have the ability to travel to the other side of the world in a matter of hours, it really throws off these cycles called the circadian rhythm. The result is jet lag which refers to a temporary sleep disorder you experience as your body readjusts to a new time zone.

As Australians, we should probably be jet lag pros by now. It’s generally hard to travel anywhere outside of the country (or even from one coast to another) without dealing with the effects of jet lag.

So, what are the symptoms of jet lag?

Although jet lag’s symptoms are temporary, it can severely affect your holiday or business trip. Plus, the more time zones you travel through, the worse these symptoms can get. Symptoms of jet lag include:

Knowing how important sleep is to our overall well-being, it makes sense that a major disturbance in our circadian rhythm such as travelling through handfuls of time zones can have a major impact on our ability to function properly. 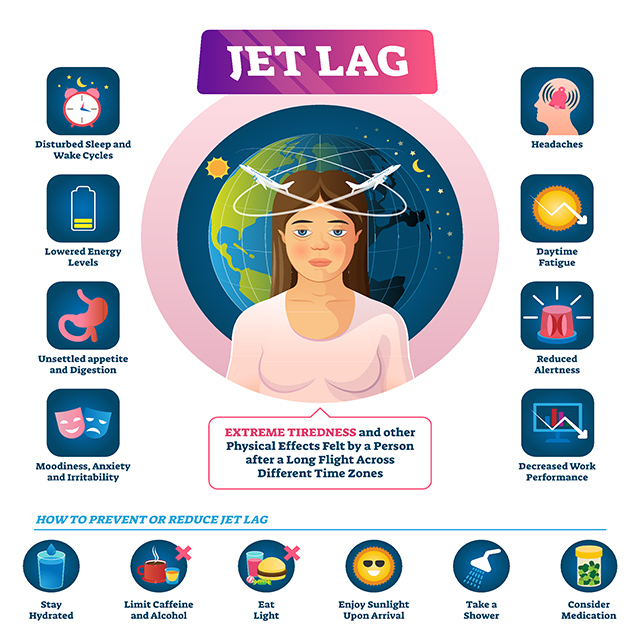 How to Beat Jet Lag

When it comes to our sleep patterns, everyone is different. So, unfortunately, there is no one-size-fits-all jet lag cure. Your experience with jet lag will also depend on whether you’re travelling east or west and how many time zones you’ll be shifting.

Actually, there really is no “cure” for jet lag. At the very least, it might still take a day or two to fully readjust after travelling through multiple time zones. Still, there are some steps you can take to minimize the effects of jet lag.

For starters, you should start preparing for jet lag in the few days before you actually travel. One mistake Aussie travelers often make is that they wait until they’re on the plane or at their destination to start thinking about jet lag.

Before you embark on your trip, start adjusting your sleeping (and eating) patterns to better match the time zone of your destination, little by little. Even if you’re going for a long trip where at least a small hit of jet lag is inevitable, it’s important to make small adjustments before the travel even begins.

Use Light to Your Advantage

As we mentioned, light and darkness send major cues to our brains telling us when we should be awake and when we should be asleep. So, regulating your exposure to light before you leave and after you land to help reacclimate your body to the new time zone will help substantially with the effects of jet lag.

It does get a bit trickier to when travelling across more than eight time zones, though. For this, you can use sunglasses to avoid daylight and artificial light like from a laptop or overhead light when the sun has gone down to try to stay on track.

The idea is to mimic the light conditions in your destination location to help your body adjust more naturally.

Melatonin is a hormone that the body naturally produces to induce sleep. When the sun goes down and about two to three hours before we sleep, melatonin is released by the pineal gland into the bloodstream which makes you feel drowsy and like you’re ready to get some shut-eye.

Melatonin can also be taken in a capsule form. This type of melatonin is more concentrated and gives us a slightly higher dosage of the hormone than our body naturally produces. To help with jet lag, many people take melatonin pills to induce that nighttime feeling and is a good alternative to more intense sleeping aids.

In countries like the US, melatonin pills are available over-the-counter since it is considered a food source, but here in Australia, it requires a prescription from your GP. When you’re planning to travel overseas or somewhere that takes you across multiple time zones, it might be a good idea to ask for a prescription to help with jet lag from your GP.

In order to better prepare your body for the time zone of your final destination, melatonin helps make you feel sleepier at a time when your body might not naturally be interested. It’s that little extra push you might need to get on the right time zone and avoid far worse consequences due to jet lag.

Maintaining your general health before and during your trip will also help with jet lag symptoms. Staying hydrated is a big factor in avoiding many of the uncomfortable effects of jet lag and sticking to your destination’s time zone once you get there will be essential.

It’s also super important to keep your body moving when you start to feel any effects of jet lag. Especially on the flight, try some in-flight exercises that keep your body from falling asleep when you’re meant to be pushing through for a few more hours to get on the right time zone.

Exercising before, during, and upon arrival from your travel day will also help with any digestive issues that may arise due to jet lag.

You still might feel it for a day or two, but preparing properly in the days before your trip, regulating your light exposure, using melatonin, and staying hydrated and active means you at least won’t be feeling jet-lagged for weeks.