How to Predict a Hamstring Injury in AFL

How to Predict a Hamstring Injury in AFL

Your hamstring refers to a group of muscles at the back of the thigh - the Semitendinosus, the Semimembranosus, and the Biceps femoris. A strained hamstring is one of the most common injuries in the AFL, causing players to miss countless games every season.

Hamstring strains are common in active people, not only AFL players. Hamstring contusions, on the other hand, happen more often during contact sports like footy. Let’s define both.

A hamstring contusion is a tear caused by direct impact to the group of muscles behind your thigh. The muscles are essentially being crushed by the thigh bone due to the impact and can cause pain, swelling, bruising, and sometimes limited ability to move.

A hamstring strain is when the muscles tear, but not necessarily due to a direct hit. Technically, a hamstring contusion is a type of hamstring strain since they are both tears to the muscle group, but a muscle strain can be brought about in a few different ways other than direct impact.

Additionally, hamstring strains occur in one of three grades: 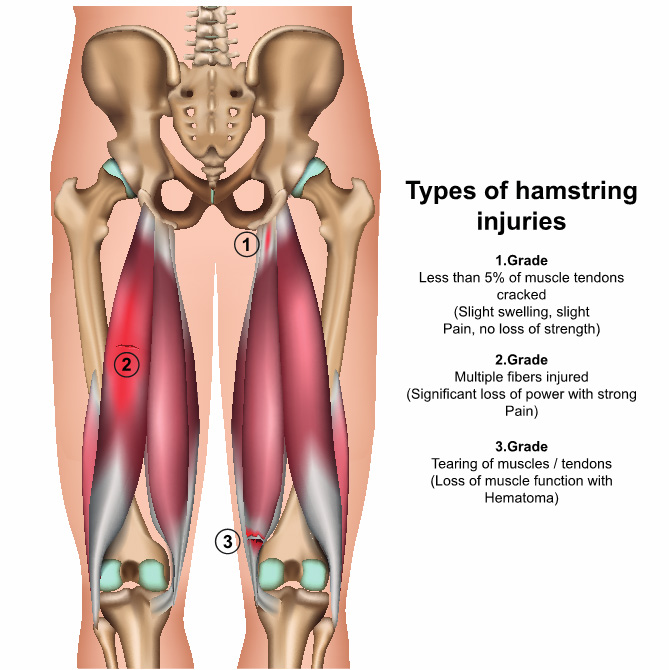 Considering these causes, it makes sense that hamstring strains are so prevalent in the AFL. During a game, you’re constantly sprinting and darting from one point to the next, it’s necessary to stretch meaning it’s possible to overstretch, and it’s likely you have other injuries in your back or hips, all of which can lead to hamstring strains.

For an AFL player, it’s not likely that you have poor flexibility, fitness, or endurance. Still, it’s always important to maintain a training regimen that keeps your body limber, fit, and strong. For AFL players, muscle imbalances and back issues might be the more prevalent risk factors.

During the footy season, it’s likely that you’ll be using your dominant leg more than the other, plus, doing certain moves can build up some muscles in the leg while neglecting others. This could easily lead to muscle imbalances both overall and within a specific muscle group.

To rebalance your body, it’ll be important in the off-season to train as evenly as possible. Of course, you’ll want to do your best to balance everything out in-between games, but to be fair, this isn’t the most realistic when your goal is to play the best footy possible.

Also, back and hip issues are a huge factor in potential hamstring injuries. If you notice back pain or if you’ve recently injured your hip, it becomes extra important to take caution with your hamstrings. Your hamstring muscles are connected to your back through the hip joint, so paying attention to these connections will serve you well.

There are a few steps in the treatment of a hamstring injury, so let’s go through them in order.

You’ll need to employ the PRICER method. It’s an expanded version of RICE which you may already be aware of. For AFL players, though, the extra steps are important.

During this process, you can also take anti-inflammatory medication to help with the inflammation.

Once you start seeing a physiotherapist, they will help you with an exercise program to help rehabilitate the muscles. Although these exercises won’t be as strenuous as you’re probably used to as an AFL player, it’s important not to rush the process.

Your physiotherapist might even suggest some remedial massage to help during your rehabilitation.

Generally, hamstring exercises after a hamstring injury will include stretching and strengthening the muscles in a holistic way as well as preventative exercises you can do during the AFL season.

Looking at the risk factors associated with hamstring injuries, as we mentioned earlier, are the best predictors of future issues. So, depending on what risk factors you might be presenting, your physiotherapist will show you preventative exercises based on your specific needs.

For example, your physio might work on strengthing your abduction and adduction in the hip joint to strengthen those muscles to prevent a hamstring injury. Or you might work on the flexibility in your lower back which can also help.

Or, you might need direct attention on the hamstring itself, whether that’s strengthening or elongating the muscles with targeted exercises.

Book an appointment with one of our expert sports physiotherapists to help with your rehabilitation or prevention exercises after an AFL hamstring injury. Call us today!