Although you’ve probably heard of epilepsy, understanding epilepsy is likely a different story. Unfortunately, epilepsy is relatively common and in honor of Epilepsy Awareness Month taking place every November, we’re exploring what you might not know about the condition.

Epilepsy is correlated with seizures, but epilepsy and seizures aren’t the same things. You don’t have to have epilepsy to experience seizures. Seizures can occur due to diabetes, kinked blood vessels, and other various health conditions. Epilepsy is just one of those conditions.

Epilepsy is a neurological disorder and yes, seizures are involved due to temporary disruption of the electrical signals in the brain. As we think and behave, neurons are constantly firing in our brains in the form of electricity. When these electrical currents are out of whack, they can cause a seizure.

Currently, around 250,000 Australians live with epilepsy and 3 to 3.5% will experience epilepsy at some point in life. Most often, epilepsy is diagnosed in childhood or as a senior, with 40% of sufferers being children.

There are various types of epilepsy as well. For some, epilepsy eventually fades. For others, epilepsy is a life-long struggle.

Most people are diagnosed with a specific epilepsy syndrome versus a generalised diagnosis of epilepsy which helps in the treatment process. 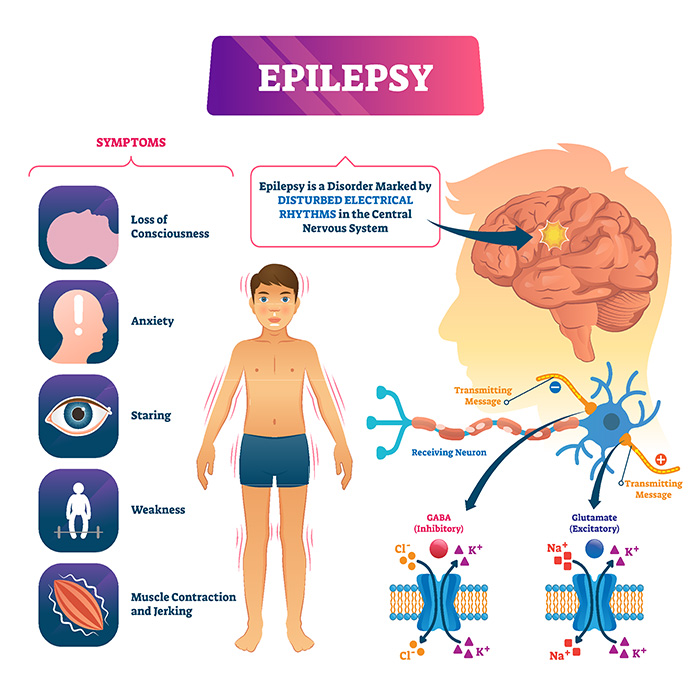 Some types of epilepsy syndromes include:

Differentiating between these different kinds of epilepsy syndromes depends on factors like what age the seizures began, seizure types, linked diseases or conditions, its progression over time, and its response to medication.

Epilepsy is a mysterious disorder and only about half of the people diagnosed ever find out the cause of their disorder. Some known causes of epilepsy include:

The main symptoms occurring with epilepsy, as we’ve mentioned, are recurring convulsive or non-convulsive seizures. So, what is a seizure?

A seizure is an unpredictable neural episode occurring when the normal communication function between electrical impulses in your brain becomes confused or out of control. They can be frightening but most of the time, a seizure will stop on its own.

The characteristics of a seizure depend on what type of seizure you’re dealing with.

The good news is that more than two-thirds of people with epilepsy can prevent seizures with medication. Sometimes, surgery is offered as a treatment option and complementary therapies can be helpful.

Additionally, there are some preventative measures you can take. Sometimes, certain triggers can induce a seizure and making a few lifestyle changes can keep seizures at bay. Everyone is different but some common triggers to look out for include:

Of course, not all of these triggers are preventable but it’s important to make note of your triggers so that you can manage your epilepsy more effectively.

At Physio Inq, we can work with you to help treat your epilepsy. It’s not a direct treatment program and shouldn’t replace your medication. But, by fostering an overall healthy lifestyle, which includes getting help with exercise and nutrition, our therapists are here to assist.

November is Epilepsy Awareness Month and there are things we can do as a community to make a difference for those living with epilepsy. Various organisations around Australia can help you set up an event, raffle, or fundraiser to join the cause.

Hosting a Tea4E event is a great way to fundraise while sharing some delicious treats, laughter and games. Simply choose what you’d like to do on a day in November and at a time that best suits you!

The simple act of making a cup of tea can make a positive difference to the lives of those impacted by epilepsy. So get that kettle on!

If you or someone you love is living with epilepsy, give us a call today and we’ll go over some options for how we can help. Especially if your epilepsy was caused by an accident or injury, physiotherapy is how you can get back on track and reduce your epilepsy symptoms.

We even offer home physiotherapy services that can come to you in Sydney, Western Sydney, Northern Beaches, Wollongong, Melbourne, Adelaide, Canberra & Brisbane! Call us today or book an appointment online with one of our expert physiotherapists in Australia.