Can Caffeine Make You Tired All The Time? 5 Hidden Truths

Can Caffeine Make You Tired All The Time? 5 Hidden Truths

Most of us can’t bear to face the world without a cup of coffee first. It gives us a much-needed morning boost and is a beloved ritual around the world.

But, some people actually get more tired after a cup of coffee. What’s the go? Can caffeine make you tired all the time? 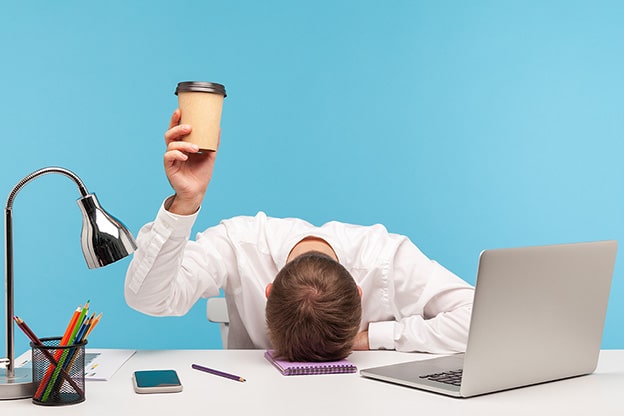 It’s true. In some cases, coffee can actually contribute to making us sleepier and more fatigued.

Here, we’re uncovering five hidden truths about coffee and caffeine that contribute to making us tired instead of perking us up. Then, we’ll share our tips on how to avoid these adverse effects.

But first, how does caffeine affect the body?

Before we get into why coffee might be making us tired instead of energised, it’s important to understand how caffeine affects the body in the first place.

Caffeine mostly targets your central nervous system. It stimulates the release of a neurotransmitter called dopamine. Dopamine controls our experience of pleasure. It’s why drinking coffee is so enjoyable for many of us.

Dopamine also increases our heart rate which pumps more oxygen to our muscles. This can also stimulate stress hormones like cortisol and other chemicals like norepinephrine and epinephrine, putting out bodies in “fight or flight” mode. Caffeine can also increase our metabolism.

Since this stress response is related to feeling alert with better concentration and coordination, caffeine has become a way for people to wake up and feel energised. However, as we’ll see, these effects can also cause the opposite reaction -- sleepiness.

So, how can caffeine make you tired all the time? Let’s explore some potential reasons why coffee might make you sleepy.

Adenosine is a chemical that regulates your sleep-wake cycle.

Adenosine binds to specific receptors in the brain to prepare your body for sleep. The caffeine in coffee blocks these receptors. However, adenosine continues to be released even with caffeine in your bloodstream. The difference is that these chemicals have nowhere to attach.

So, when the coffee wears off, your body will have an excess of adenosine. As this buildup begins to attach to the previously blocked receptors, it can lead to sleepiness.

Coffee is a Diuretic

A diuretic is any substance that causes you to use the toilet more often. This means that caffeine can cause you to lose more fluids than normal. These effects are especially noticeable if you drink four or more coffees per day.

As you start to become dehydrated, you’ll likely feel more tired and depleted.

However, a study from Harvard Medical explains that coffee might not be as dehydrating as originally thought. The water in the coffee is said to counteract any diuretic effects.

Still, drinking too much coffee often correlates to not drinking enough water and other hydrating beverages throughout the day.

Sugar in Your Coffee

Perhaps it’s not the coffee itself that’s making you sleepy, but the sugar in your coffee. Not to mention, if you have a sugary muffin or croissant with your morning coffee, it’s possible that you’re blaming the wrong suspect altogether.

When you consume more sugar than your body is used to, excess insulin is produced to counteract it. With this extra insulin, your blood sugar drops causing tiredness.

This process is known as a sugar crash. It could be the culprit of your sleepiness after too much coffee.

Individuals who drink coffee every day can build up a strong tolerance to caffeine. Remember those adenosine receptors? Well, they’ll actually increase in number over time when caffeine is consumed consistently.

Since caffeine blocks those adenosine receptors, your body builds new ones. So, since most of us will feel the stimulant effects of caffeine after a cup of coffee, some with a high tolerance might experience the opposite effect after a while.

So, if you start drinking less coffee than your average intake, you’ll experience caffeine withdrawals due to these added adenosine receptors. It’ll be like a surge of sleepiness all at once. So, if you’re cutting back, you’re likely to feel more tired after a cup of coffee than before.

Caffeine is a stimulant and it affects hormones like cortisol and epinephrine. Cortisol is the stress hormone and epinephrine is better known as adrenaline.

While these hormones can sometimes make us feel energised, pulsing with the familiar buzz of coffee, it can also make us fatigued and drowsy.

Too much stress over time can lead to chronic tiredness -- the exact opposite effect we want from our beloved long black. However, drinking less coffee can actually reduce our stress levels and make us feel more energised.

How to Reduce the Sleepy Effects of Coffee

Let’s face it. Aussies love coffee. We have some of the best cafes, brews, and baristas in the world. So, we’re not going to tell you to give up coffee completely. That’s unrealistic.

But, how can we make sure our coffee isn’t sabotaging out efforts to wake up?

The best way to avoid feeling fatigued after drinking coffee is to stick with the daily intake recommendations. If you consume about 400 mg of caffeine per day, you should be totally fine. This comes out to about two 200 ml cups of coffee each day. That’s manageable, right?

Additionally, be sure to avoid sugars or syrups in your coffee.

In Australia, our coffee is usually good enough to have with some milk or simply straight up. However, if you’re elsewhere around the world, you might be tempted to load up on sweeteners and syrups. Avoid the temptation to skip the looming sugar crash.

You can also try alternating your two cups of coffee with a cup of water to make sure you’re extra hydrated to avoid fatigue from coffee. Then, after lunch, consider switching to decaf coffee or herbal tea for a warm treat.

By adhering to these guidelines, most people won’t have the sleepiness problem after drinking coffee. However, if you’re wondering why caffeine seems to be making you more tired than before, now you might know why.

Always best to connect with  your local GP, Nutritionist or Dietician on more sound advice and recommendations.

How Many Coffees a Day Is Too Much?
Here Is What You Should Try To Speed Up Your Metabolism