What Are the Symptoms That I Could Have Chronic Fatigue Syndrome

What Are the Symptoms That I Could Have Chronic Fatigue Syndrome

Chronic Fatigue Syndrome (CFS) is complex and totally debilitating for those who suffer from it. It’s characterised by extreme fatigue that’s not improved by rest and only gets worse with more physical exertion.

CFS affects as many as 180,000 Australians. One could imagine just how frustrating it would be to feel totally exhausted all the time, unable to work, play, or simply enjoy life. Here, we’re going over what characterises Chronic Fatigue Syndrome and how physiotherapy can help.

What is Chronic Fatigue Syndrome?

What’s complicated and mysterious about Chronic Fatigue Syndrome is that it’s not caused by one disease or disorder. It seems, instead, to be caused by a combination of factors, making it difficult to both diagnose and treat.

Chronic Fatigue Syndrome, however, is about more than just feeling fatigued. To be diagnosed with CFS, the fatigue must persist for at least 6 consecutive months and severely interfere with your daily life. Plus, of all the symptoms that can occur due to Chronic Fatigue Syndrome, you’ll likely only be diagnosed if you’re experiencing four or more symptoms at any one time.

Plus, CFS, also known as myalgic encephalomyelitis (ME), has overlapping symptoms with other associated disorders or diseases. As you can already see, this is a complicated disorder.

There are a few theories on the causes of Chronic Fatigue Syndrome but none have been fully conclusive. Some suggest a viral illness, others theorise that CFS is purely psychological.

Suggested theories on the causes of Chronic Fatigue Syndrome include:

In addition to prolonged fatigue for at least 6 months, and overwhelming fatigue caused by minimal physical activity, other symptoms of Chronic Fatigue Syndrome include:

Again, just as Chronic Fatigue Syndrome is mysterious in and of itself, these symptoms are also inconclusive in nature. Severity varies from person to person and the symptoms often ebb and flow, alternating between periods of illness and remission.

However, although someone with Chronic Fatigue Syndrome may feel “back to normal,” the symptoms will often resume. 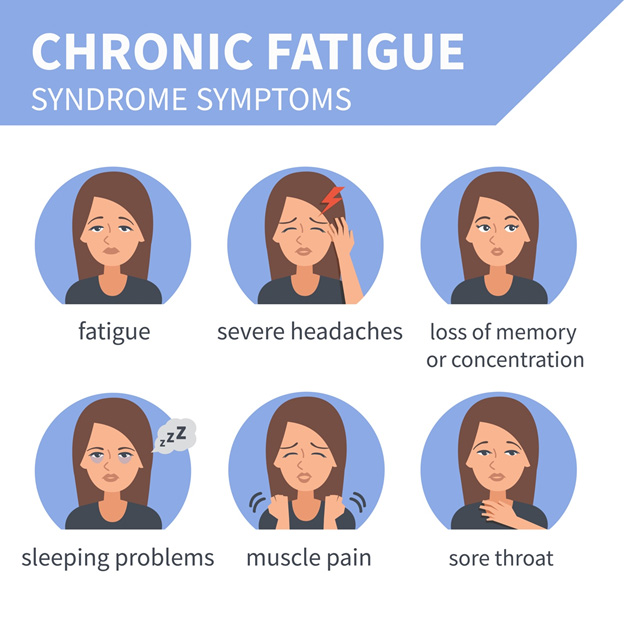 As previously mentioned, other disorders and diseases can often present similar symptoms to CFS and therefore suggest some kind of connection. These disorders include:

There are also a few possible differential diagnoses of CFS including:

What Can I Do for Chronic Fatigue?

To manage the symptoms of CFS, the following medications are typically used with varying results:

*We would always be recommending to scheduling an appointment with your local GP to discuss your management of CFS.

Cognitive Behavioural Therapy has become a common treatment for CFS. This form of cognitive therapy works with patients to create a consistent approach to activities, sleeping habits, and unhelpful thought patterns.

For those suffering from extreme CFB, cognitive therapy can help you to deal with any underlying psychological issues and is often combined with other forms of treatment.

When those with CFS attempt to manage their symptoms on their own, they actually can see improved results. Self-pacing, stretching, breathing exercises, and yoga have all been reported as beneficial.

Again, however, it’s common to apply these self-management strategies in addition to trying other methods to treat your CFS.

Physiotherapy has been incredibly effective in treating chronic fatigue. Again, combined with other treatments, people with CFS have seen promising results from their work with a physiotherapist.

Physiotherapy, in particular, will focus on two key aspects of your CFS: learning to live with your limitations due to this condition and creating a graded exercise therapy program to avoid the “crash and burn” effect.

For example, since chronic fatigue doesn’t ever go away, it’s a difficult reality to accept. There may be extended periods of feeling strong and “cured,” only to be totally debilitated when the condition returns.

Your Physiotherapist will help to prevent this by creating a structured program that won’t push you too far past your limits. Long story short, the goal is to expand your functionality without overloading your system.

To do so, your Physio along with an Exercise Physiologist might employ some of the following techniques:

Ready to take control of your life again? Sick of letting your CFS run the show? Book an appointment with us today and we’ll connect you with one of Physiotherapists Or Exercise Physiologists, whatever is most appropriate . Visit one of our convenient clinics located throughout Australia or book our mobile physio services that come to you!